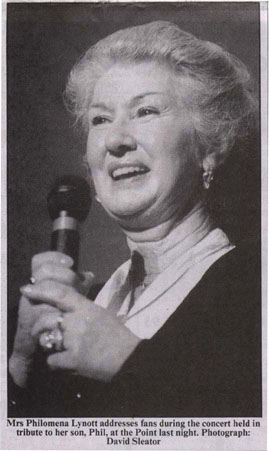 NOT ALL the Thin Lizzy boys were back in town for the tribute to the band's late lead singer, Phil Lynott, at the Point in Dublin last night.

And while some die-hard fans grumbled about the absence of guitar player Gary Moore from the line-up, most were happy to be close to the soul of their Dublin-born pop idol who died 10 years ago yesterday.

The 8,000 fans paid their respect to one of Ireland's first rock stars by snapping up the merchandise and singing along fervently to their favourite Thin Lizzy ballads such as Whiskey in the Jar. Just 30 minutes after the doors opened the event T-shirts were sold out.

One Japanese devotee bought £160 worth of band accessories according to the assistant manager of Irish Merchandising Services, Mr. Tony Fitzpatrick.

The "Vibe For Philo" is an annual event to commemorate the anniversary of the Crumlin musician's premature death at the age of 35 from heart failure and pneumonia. An hour before the doors opened, over 300 dedicated members of the Official Thin Lizzy Supporters Club were patiently queuing in the drizzle for a promised chance to get back-stage to meet some of the starts of the evening.

There were even some fans at last nights gig who never experienced Lynott's charisma first hand. Despite the fact that Dublin teeenager Rosaleen Long and a bunch of her school friends were all six years old when Lynott died, they proudly boasted that they had sang the Thin Lizzy anthem Whiskey in the Jar at school.

Phil's mother, Philomena, his widow, Caroline, and his two children, Cathleen and Sarah, were in the audience, while boxer steve Collins read Lynott's poem The Warrior.

Towards the end of the night, Philomena took to the stage to thank the organizers and the faithful Fans. And then the remaining Thin Lizzy members and star guests paid the ultimate musical tribute to Lynott as the crowd wept and cheered.

Despite the fact that Thin Lizzy never made it big in the US, there was no shortage of long-haired Americans singing the band's praises backstage. Rock guitarist Bob Calkin from Los Angeles was even plugging his own memorial benefit tribute in Hollywood this August on the anniversary of his birthday.

"We're going to be having a lot of really big people at it. Thin Lizzy have a fine reputation for musicianship and they inspired a lot of people."